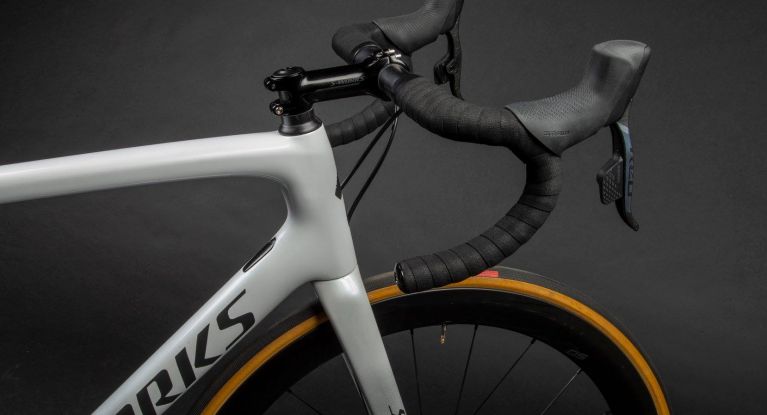 The Fastest Just Got Faster

A post shared by Specialized Bicycle Components (@iamspecialized) on Feb 6, 2019 at 11:41am PST

The biggest standout feature of the new SRAM Red eTap AXS groupset is undoubtedly the extra cog on the cassette. While SRAM might not be the first to throw a 12-speed groupset on a road bike, they are the first to totally revolutionise the current understanding behind gear ratios.

This new understanding from SRAM works around a 10-tooth sprocket on the rear cassette. It may only be one less tooth than the standard 11-tooth sprocket – the dinky little one furthest from the wheel – but boy has it opened up an entirely new range of gearing options.

According to SRAM, this has two clear advantages in giving you a smaller and bigger gear at either end of the scale – granting you more speed on the descent and a faster cadence on the steeper climbs.

Having the extra gear isn’t the only benefit to SRAM’s new AXS groupset. They promise that having a smaller front chainring means that you’ll stay in it more of the time, increasing your overall pedalling efficiency.

There’s also a much smaller jump between the front chainrings (13 teeth smaller, to be precise) as most of the range is in the rear cassette. Fewer shifts at the front derailleur will mean that sudden drops in power are a thing of the past, allowing you to glide seamlessly up, over and down terrain, adding even more to your overall pedalling efficiency.

Speaking of power, with the new AXS groupset, you get an integrated power meter from Quarq nestled neatly in the crankset. Officially part of Quarq’s DZero family, it is promised to be their most consistent and reliable power meter to date, adding to the efficiency and positivity of every ride.

Not only will your pedalling be more efficient thanks to the 12-speed groupset, but your bike will be lighter too. Smaller rings equal less material in the chainrings – simple.

In an interview with Cycling Weekly, JP McCarthy, SRAM’s road product manager, had this to say about the new groupset:

“Overall the biggest efficiency gain from the system is driven by having a smaller difference between the front chainrings and at the same time using a substantially larger cassette.

Beyond the extra gear

While our eyes are undoubtedly fixated on the extra gear, SRAM want us to also look at all the other features they’ve added to the new Red eTap AXS groupset. One of the big ones is the versatile rear mech, a fantastic piece of tech that can be used in both one-by and two-by systems.

It also has Orbit technology which removes the need for a clutch, replacing it with a fluid dampener that’s both lighter than a clutch, and smoother. All this contributes to much crisper shifting, allowing you to fly through the gears with little worry of crunching or skipping a sprocket. As well as ensuring smoother shifting action, this little piece of tech will also reduce chain bounce, keep its shape after a big hit and will never need to be serviced due to its internal mineral oil – oh, and did we mention that it’s also compatible with existing eTap batteries? No need to buy a brand new set.

Attention has also been paid to the chain with SRAM introducing a new and narrower ‘Flattop’ variety. This radical change wasn’t made entirely for the new spacing between sprockets, it also has the effect of reducing friction, making for a much quieter drivetrain.

The chainrings, like the chain, have also been completely re-designed. The new design is made from one single piece of aluminium and according to SRAM, this has the advantage of making the rings last around 50% longer than the previous version. It’s also understandably lighter and a whole lot stiffer.

Finally, in terms of the electronics that take care of the shifting, SRAM have claimed that their new system is a whole two times faster than the previous version – not that it was ever renowned for being ‘sluggish’. It’s worth noting here that the components of this groupset are not backwards compatible with the former 11-speed system (aside from the batteries).

It’s all on the app

Striving for even more personalisation, SRAM have created the new AXS app that can be downloaded straight to your smartphone. This gives you full control of all the buttons and all the settings dialled into each component. If you’ve got numerous bikes on the same system, you can easily transfer the same settings across, all with the touch of a button.