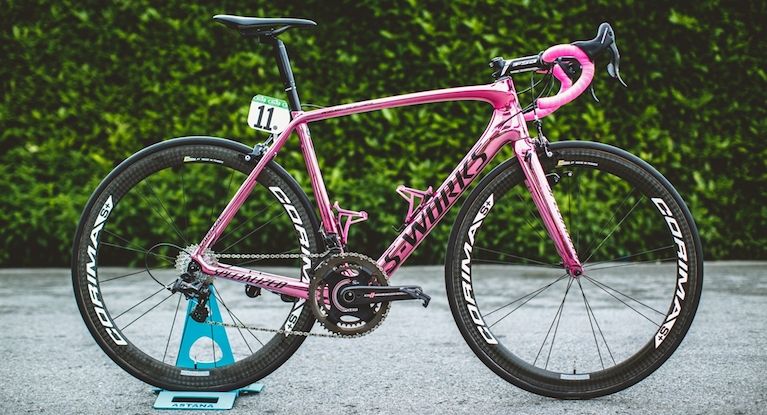 Italian national champion Vincenzo Nibali is one of few riders in the peloton who is lucky enough to ride a custom bike, complete with signature shark motifs â€“ inspired by his nickname, â€˜the Shark of Messinaâ€™. Custom paint jobs tend to be reserved for world and national champions, Grand Tour winners and those who have earned the right to show off their achievements, or their nickname upon the machine they ride. For example, Dan Martinâ€™s â€˜Emerald Pandaâ€™ Specialized Tarmac for the Liege-Bastogne-Liege, or Peter Saganâ€™s particularly classy frame, which stylishly incorporates the rainbow colours of the world champion.

As the Giro dâ€™Italia rolled into Turin for the last stage of the Giro dâ€™Italia, Vincenzo Nibali swapped his custom Specialized Tarmac for a new model, hot off the press. With the sun hidden behind thick clouds for much of the final stage, the Giro championâ€™s new chrome pink frame promised to take up the duties of brightening up the peloton.

The now two-time Giro championâ€™s new bike has split the critics. However, its perhaps garish shade aside, it is a refreshing diversion from the flat pinks and yellows of recent general classification winners, given its bold chrome finish. Whereas other race leaders opt for pink bar tape or subtle highlights on the frame to indicate their leadership, Specialized held nothing back with the Giro winnerâ€™s bike.

Nibaliâ€™s new Tarmac is built with all the components normally found on his bikes: mechanical Campagnolo Super Record groupset, Corima carbon tubular wheels and S-Works Turbo 24mm tyres, SRM power meter, FSA finishing kit, pink Elite bottle cages and matching pink Supacaz bar tape. The only real change on the new bike, besides its colour, is a prototype seat post, which looks to be easily adjustable via a rotating collar just below the saddle.

The final stage of any grand tour tends to be reserved as a sort of lap of honour for the general classification teams, while the sprinters are given time to play towards the end. At just 163km in length, the stage did not give Nibaliâ€™s new bike a great deal of air time, but the bright and shiny frame has drawn plenty of attention. Had the weather been good, its glossy finish might have had an even more dramatic impression, reflecting the sunâ€™s rays into the eyes of competitors and spectators like some sort of passing superhero.

Tempted to sample a little bit of what itâ€™s like to be a quadruple Grand Tour-winning cyclist? Weâ€™ve got several top-spec Tarmacs, similar to Nibaliâ€™s, available in our online store.

Oh, and did we mention there were three riders total in the top ten on GC who were riding Specialized? Thatâ€™s more than any other brand. Not to mention the winner of the young rider classification, Bob Jungels of Etixx Quick-step, and second place in the points classification for Matteo Trentin.