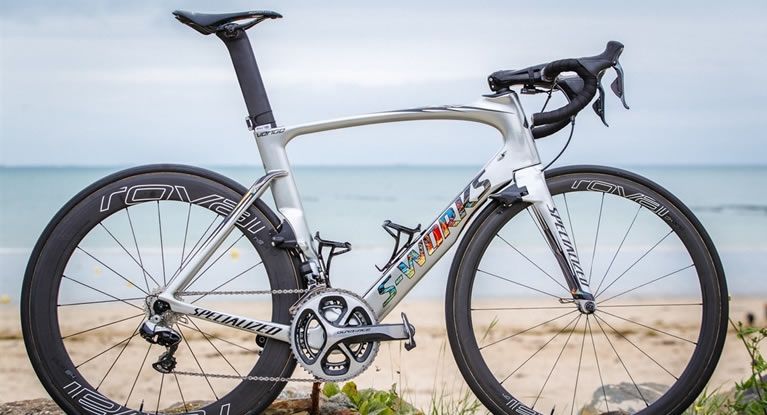 The first four stages of the tour did not go exactly as predicted. Stages one, three and four had â€˜German sprinterâ€™ written all over them. Unfortunately for Kittel though, his stage 1 gallop was foiled by the surprise burst of the Manx Missile, Mark Cavendish, who finally managed to add the yellow jersey to his trophy room. Stage two, with itâ€™s difficult uphill finish, won by world champion Peter Sagan, was never going to be in Kittelâ€™s playbook. Stage 3 didnâ€™t work out for the big German either as his compatriot Andre Greipel was edged out by the resurgent Cavendish by the narrowest of margins. That was until an emotional Kittel finally got his moment of glory on Stage 4, winning by a perfectly-manicured hairâ€™s breadth over Frenchman Bryan Coquard.

The bike which finally carried him over the line for â€“ hopefully â€“ not the last time this tour, was a brand spanking new custom-painted S-Works Venge Vias. With more of the silver paint that has already graced Alberto Contadorâ€™s own Specialized custom Tour bike. Like Contador, Kittelâ€™s new frame is highlighted with bright custom designs. There is apparently a personal meaning in the designs for Marcel Kittel, but what that meaning is, no one has yet let slip. All we can be sure of is that the bright paint splashes, reminiscent of fireworks, are strikingly individual to this yearâ€™s comeback king.

The S-Works team is always looking to build on its successes and improve the bikes we build in any way possible. One feature that is new to Kittelâ€™s bike are its revamped brakes â€“ that represent a significant improvement over their predecessors. The big German sprinter adopts a very aggressive position, not uncommon among the fast men of the bunch and the geometry and setup of the bike reflect that. He runs a non-standard cockpit with FSA round-profile handlebars and an unmarked 120mm Zipp stem, offering a greater stiffness that comes in handy in bunch sprints.

Besides his personalised front-end, Kittelâ€™s Venge features the standard, high-spec Roval wheelset youâ€™d expect on an S-Works machine, deep section CLX64 rear and mid-section CLX40 up front â€“ the combination of choice for all of the Etixx-Quickstep team when they tackle flat stages.

Kittelâ€™s bike is fitted with the peloton-leading Shimano Dura Ace Di2, giving him instant control over his gears as he lines up the sprint. The next chance for the sprinters comes on Thursdayâ€™s Stage 6 if they can survive all 160 tortuous, rolling kilometres that threaten to sap strength and stamina from the larger riders not designed for hills. With just three or four other real chances for the sprinters, including the Champs-ElysÃ©es, it would be a brave fan to bet against Kittel, and his flashy new frame, to take another stage this tour.

You can shop the S-Works Venge Vias online, or in one of our stores 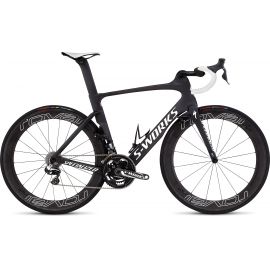