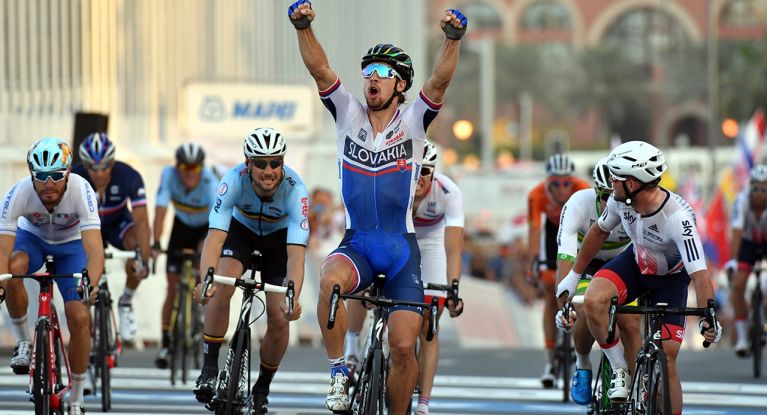 There has been just one story on everybodyâ€™s lips this week in the world of cycling; Peter Saganâ€™s incredible second win in a row at the UCI World Championships.

…and a clean sweep of wins for Specialized

There has been just one story on everybody’s lips this week in the world of cycling; Peter Sagan’s incredible second win in a row at the UCI World Championships.

The Slovak sprinter managed to just pip British legend, Mark Cavendish at the last, after heavy crosswinds earlier in the race had created an elite selection of riders. The remaining bunch featured some of the best sprinters in the sport, including Tom Boonen (who placed third), Alexander Kristoff, Australian Michael Matthews and Cavendish’s former team mate, Edvald Boasson-Hagen. Sagan’s victory defied the odds on what was predicted to be a finish best-suited to the likes of ‘pure sprinters’ like Cavendish, Marcel Kittel and Andre Greipel. Nevertheless, the final result was a testament to Sagan’s outrageous ability to produce results seemingly from anywhere, as well as the unbeatable performance of his custom Specialized S-Works Venge ViAS machine.

At the start of Sagan’s season there were some murmurings about the ‘curse of the rainbow bands’, which often afflicts the freshly minted World Champ at the beginning of their season in the rainbow-striped champion’s jersey. In fact in the first months of 2016 Sagan looked like he wasn’t going to get a win from anywhere and was increasingly having to be happy with second places. However, after a win at Flanders things began looking up in a big way, with all thoughts of ‘the curse’ evaporated. By the end of the season Sagan even managed to top the individual UCI points ranking. We’re excited to see what he can do at the Bora-Hansgrohe team, where he’ll be wearing his second consecutive World Champs jersey all throughout 2017.

The women’s road race was something of a surprise result, with Danish rider Amalie Dideriksen aboard her Specialized S-Works Amira, snatching the victory from the grasps of the much-fancied Dutch team. Indeed, it was the women from the Netherlands who dominated proceedings almost from the start, with an impressive show of strength that saw them attack and attack throughout the race, before massing at the front of the peloton to set a blistering pace going into the final kilometres. The plan was clearly to thin out the pack by setting such a breakneck speed, in the hope that Kirsten Wild (second) could take the sprint. In the end the pressure was not enough to shake off Dideriksen, with the diminutive Dane sneaking past Wild in the final metres to snatch the title.

Earlier in the week the Women’s team time trial was won by Boels-Dolmans, led by their elite group of riders that included US star Evelyn Stevens, competing in her final race before retirement, and GB hero, Elizabeth Deignan. The Dutch squad blew away the nearest competition from Canyon-SRAM team by a considerable margin, putting an end to the German team’s dominance in this event. It must have been something about Specialized Shiv TT bikes, because after Boels brought home the women’s title it was Etixx-Quick Step’s turn to claim the men’s. Led by indefatigable TT legend Tony Martin, the Belgian team smashed apart the competition to come home 11 seconds faster than defending champions BMC.

It was not Martin’s only success of the blisteringly hot week in Doha, with the big German claiming his fourth ITT title. Prior to the championships Martin publicly announced he was returning to his old TT position after a fairly poor performance (at least by his standards) at the Rio Olympics – in the end, it was a change that paid off hugely, as he stormed to victory on a course that was absolutely suited to him. While his original position may not have been as aero as the one he’s been using more recently, the same cannot be said of his S-Works SHIV – a ruthlessly fast aero bike that was specifically engineered to do one thing, win races. Martin smashed the course to bits and came home a clear winner an astounding 45 second ahead of second-placed Vasil Kiryienka.