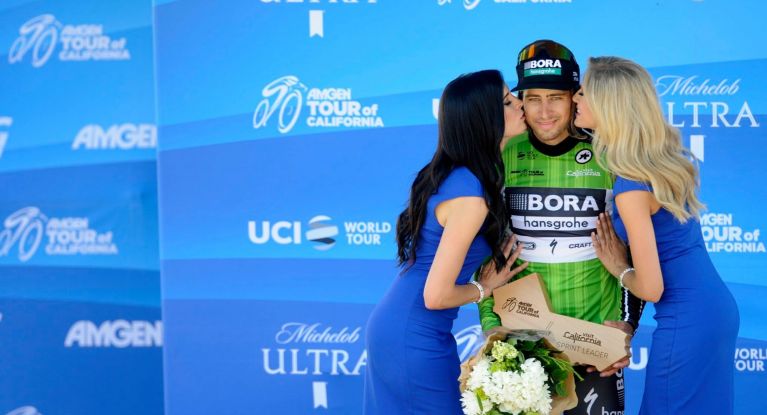 Peter Sagan is a rare breed of cyclist; a man whose abilities transcend the boundary between mountain bike and road racing, and whose personality would be well-suited to the Hollywood red carpet.

Five times Peter Sagan was the Raddest Dude in Cycling

Peter Sagan is a rare breed of cyclist; a man whose abilities transcend the boundary between mountain bike and road racing, and whose personality would be well-suited to the Hollywood red carpet. His omnipresence in the Top-10 of nearly every race he enters would be enough to turn fans against him for the predictability of it, but Sagan has made himself a rare exception to the rule. He wins and loses with the same attitude which is all at once playful, dedicated and passionate. His reputation is one of a super-cool character with a magnetic personality. Here are just five times that Sagan has pedalled himself into the hearts and minds of the cycling world.

Ruby Isaac, a super-enthusiastic nine-year-old aspiring pro cyclist from Kettering, has been doing the rounds on the professional cycling scene, interviewing her idols with the support of Specialized. Race Reporter Ruby recently interviewed our friend Peter Sagan over a bag of gummy bears during the Tour of California. She asked him all the important questions, including how he got into cycling, his dream job, and his favourite ice-cream flavour. He was his typically charming self and was only too happy to indulge his young super fan.

Professional cyclists will often find themselves answering the same questions over and over again, especially if they are a race or stage winner or the leader of a classification. Peter Sagan is nearly always in at least one of these positions, and let’s not forget that he is also in his second year as world champion, putting him in high demand all year round. But Sagan is one of few riders with the balls to mix it up in interviews, good or bad. The 2015 Tour de France was the race in which he finished in a frustrating second place on no less than five occasions. However, he managed to maintain a sense of humour.

King of the photobomb

Not content to spice up his own interviews with movie references and the odd expletive, Sagan has been known to interrupt those of his rivals as well. Also at the 2015 Tour de France, he was captured photobombing the interviews of race leader Chris Froome, and a week or so later, German sprinter André Greipel on the Champs-Elysées.

Peter Sagan told Race Reporter Ruby (above) that he has aspired to be an actor in the past and he has already tried his hand at the craft in various sponsored videos for Sunroot. These mini-movies are definitely a step up from the familiar acting ordeals that other sportspeople are put through when advertising shampoo, for example. In these videos, Sagan recreates scenes from Rocky, Gladiator, Pulp Fiction and Grease with the help of his wonderfully willing wife.

Indefatigable Wheelie King, Sagan can pull a no-handed stunt anywhere on the road, be it crossing the finish line solo or climbing a mountain back in the grupetto. He is the peloton’s superior bike handler and the wheelie is his trademark. In this footage from the recent Tour of California, he can be seen doing his favourite stunt in the points classification jersey, completely unfazed that he was way out the back, the peloton having raced up the mountain ahead of him.

To list just five times when our current world champ was the most rad dude in cycling is to barely scrape the surface. He’s racing at the Tour de Suisse this week and is off to France to defend his five-year run of green jerseys in July, so there will surely be more of these moments to come. We look forward to being thoroughly entertained in the coming weeks!