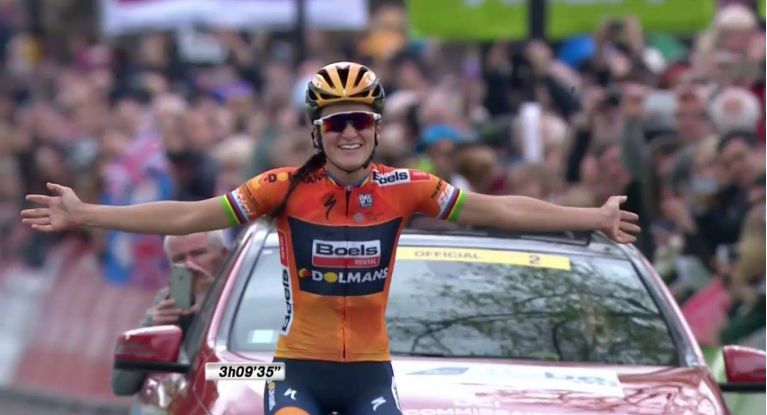 By the first week of April and the Tour of Flanders, Boels-Dolmans had cemented themselves as the team to beat. This year, however, they had scraped just one single win by the same point in the year, courtesy of this yearâ€™s world champ, Amalie Dideriksen.

Boels-Dolmans have, by all accounts, been having a decidedly quieter start to the season compared to 2016. Last year, the team’s newly ordained World Champion, Lizzie Deignan (Armitstead), dominated the early season races, opening her personal account at Omloop Het Nieuwsblad after Ellen van Dijk (now at Team Sunweb) put the team’s first mark on the board at the Ladies’ Tour of Qatar. By the first week of April and the Tour of Flanders, Boels-Dolmans had cemented themselves as the team to beat. This year, however, they had scraped just one single win by the same point in the year, courtesy of this year’s world champ, Amalie Dideriksen.

But then salvation came wrapped in a blue nimbus and a golden halo of stars. Reigning Olympic and European champion, Anna van der Breggen, is a new signing to the Dutch squad, who race on Specialized equipment, after a number of years with the Rabobank-Liv team. She is one of four riders on the team who have traded in the striking, fiery orange livery for a Champion’s jersey, in her case, the unique gold stars and blue stripes of the European Champion. Van der Breggen had a fairly quiet start to the season, gradually climbing into the top 10 at the Healthy Aging Tour. Then came the inaugural women’s Ardennes Week in her native Netherlands and a fairy tale unfolded.

The women’s Amstel Gold Race made its return to the women’s calendar after fourteen years, and it was met with huge enthusiasm by the peloton and fans. A fast and action-packed race was capped off by an impressive solo attack from the Olympic Champion who took her first scalp of the season. Her teammate Lizzie Deignan won the sprint for second place and there was an unprecedented tie for third between young pretender Katarzyna Niewiadoma (WM3 Pro Cycling) and eternal fighter Annemiek van Vleuten (Orica-Scott). Three days later, Anna van der Breggen triumphed again at the Flèche-Wallonne Femme in an almost exact re-run of Amstel Gold, right down to the podium. The only difference was that the margin between third place Niewiadoma and van Vleuten in fourth was a little more than nothing this time.

With back-to-back wins in the first two races of Ardennes Week, not to mention the team’s clutch of podiums, people started to dream of the unlikely phenomenon that all three races might be won by the same rider. Surely the rest of the peloton would be wise to Boels-Dolmans’ game plan by now and would do everything in their power to stop (recent) history from repeating itself again?

But it did. The script had been written, and Anna van der Breggen rounded the final corner in Ans alone to take victory at Liège-Bastognes-Liège Femmes and earn the crown as the untouchable Queen of the Ardennes. Who could have predicted that Deignan and Niewiadoma would resume their warm podium steps too? Anna van der Breggen and Boels-Dolmans had finally announced their presence on the world stage for 2017. The ball was rolling, and rolling fast.

The team’s next stop was the Tour de Yorkshire Women’s Race, run in conjunction with the men’s three-day stage race over the bank holiday weekend. The one-day classic-style event took the peloton 122kms from Tadcaster to Harrogate, winding through a landscape familiar to Lizzie Deignan who grew up not far from the route. It came as no surprise then, that the local lass, still on the hunt for her first victory of the year, found herself in a breakaway with compatriot Dani King and her teammate, the Queen of the Ardennes herself. As they neared the finish, a highly-motivated pack cut the break’s two-minute lead in half and Deignan’s nervous director told the former World Champion to save herself for the inevitable bunch sprint. But with local knowledge and a ballsy determination, Deignan defied those orders and launched a huge solo effort to win with almost a minute of fresh air between herself and the charging pack.

Next on the Women’s World Tour calendar is the Amgen race, a four-stage event in California with a ridiculously long name, which Boels-Dolmans will hope to win again with reigning victor and US National Champion, Megan Guarnier. The team will also look to defend their titles at the Tour of Britain and the Giro d’Italia Femminile in June. Keep a look out for the ladies in orange as the season unfolds and look out for their race-proven kit and equipment provided by Specialized. 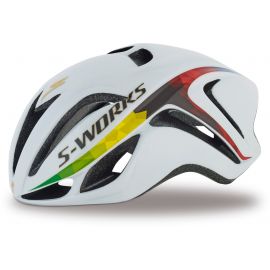 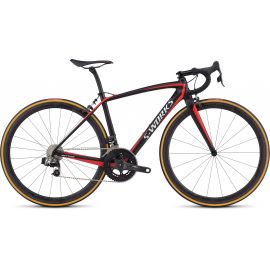 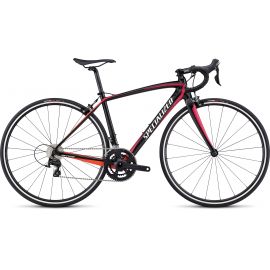