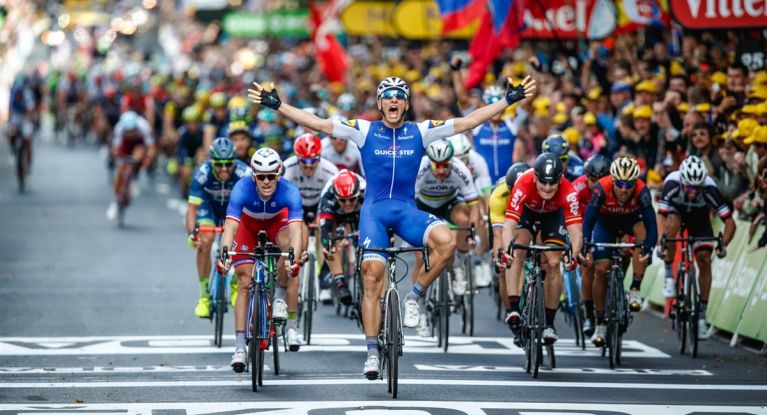 The Tour de France has been a controversial one so far. See it in stunning images!

The second week of a dramatic Tour de France beckons as the peloton licks its wounds and nurses its bruises after nine days of sensational racing.

Sure, there were some long stages where the early break laboured in vain before being reeled back in by the sprinters’ teams, but even those were animated by a high-stakes finale.

After nine days of racing, 180 riders will resume the 104th Tour in Perigueux on Tuesday 11 July. That means 18 riders have already fallen by the wayside. There are some really big names among those missing – including team leaders like Richie Porte, Geraint Thomas, Rafal Majka, Alejandro Valverde, Alexander Demare, Peter Sagan and Mark Cavendish – but for those who remain, two weeks of unfinished business still lie ahead.

After a rain-soaked Stage 1 time trial, it didn’t take long for the Tour to make history when Germany’s Marcel Kittel stormed to victory in Liege to become the first ever rider to win a Tour de France stage on a disc-brake-equipped bike.

The Quick-Step Floors rider lined up in Dusseldorf in front of his compatriots and, on a disc brake Venge, rode the 203.5km Stage 2 at an average speed of 44.06km/h, despite the rain and a puncture at almost 90km to go. The immediate intervention of his team mechanic, who changed his thru axle wheel instead of replacing the bike, allowed him to get back to the bunch before timing his sprint to the line to perfection.

Kittel’s taste for innovation didn’t stop with his choice of brakes: he combined his Roval CLX50 wheels with Hell of the North tyres that were specifically developed for the spring classics and which feature a Gripton compound that delivers exceptional performance in changing weather conditions.

The next day the all-new Tarmac took its first stage win at a grand tour after its official launch on 1 July. Peter Sagan won Stage 3 ahead of Michael Matthews (Team Sunweb) and Daniel Martin (Quick-Step Floors), finishing the 212.5km stage in 5h 07’ 19”. The punchy finale followed by a slightly uphill finish favoured the two-time world champion and even a cleat detaching from his pedal couldn’t stop the Bora-Hansgrohe strong man.

Stage 6 saw Kittel bagging his second stage win when he took advantage of hesitation among the other sprinters and launched early for the line. Kittel won convincingly, finishing the 216km stage from Vesoul to Troyes in 5h 5' 34" at an average speed of 42.413km/h.

Rest assured the rest of the tour will be full of action. Who will fall the way side next? Or will the favourite British hopeful win again?